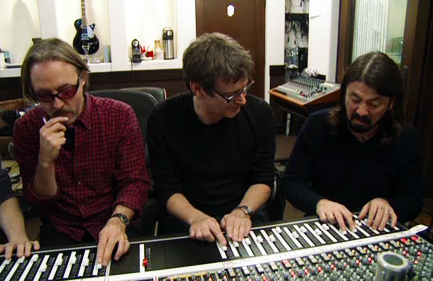 In the modern age of music the lines have been blurred between the roles of Artists, Producers and Engineers. It used to be simple…. Artists wrote songs and played their instruments, Producers were musical geniuses who’s mentored artists and ensured their songs became all they could be, and Engineers were the guys with golden ears and the technical know how to translate the producers vision into sonic reality.

The quintessential 60’s Artist / Producer / Engineer example was Lennon / McCartney, George Martin & Geoff Emerick. I think its safe to say that without that extraordinary relationship, The Beatles (maybe even music as we know it) wouldn’t have been the same. Then in the 80’s the wonder that is Thriller was made by Michael Jackson, Quincy Jones & Bruce Swedian. More recently, Dave Grohl, Butch Vig and Alan Moulder made the Foo Fighters “Wasting Light” in more of an old school style. Its a style i love – each party is able to to do what they do best, and bounce off each other to create the best product possible.

Today, although the same principals apply, the landscape has changed a little bit… artists can afford a recording setup, producers actually make the music (Beats in Hip Hop / Dance / Electronic genres for example), and engineers take creative liberties in the studio or during a mix that make a huge contribution to the overall “vibe” of a song or album. But does that mean that every musician with a Pro Tools rig is an Engineer? Does it mean everyone who makes a beat in Fruity Loops, Logic or Ableton Live is a Producer? Does it mean that every Pro Tools Op is also making a musical contribution?

I’m gonna go ahead and say absolutely not! The fact of the matter is that there are so many moving parts involved in making a great recording and you as the Artist need to make a call on just how your going to do it. Which parts of the process will you retain, and which parts will you outsource to someone who does their part better than you could?

Regardless of how you choose to approach your recording, there are some important things you should consider to help you make up your mind…

For an interesting take on seeking out the right people for the job, have a read Sound on Sounds article on the making of the Foo Fighters “Wasting Light” – http://www.soundonsound.com/sos/jun11/articles/foo-fighters.htm. Dave Grohl knew exactly what he wanted, and who he needed to make it happen, and the end result was awesome. I especially love the part where Alan Moulder decides that the best thing to in service of the record is to forego an expensive studio and mix the record back in Dave Grohl’s untreated garage!

Before you head into the studio for your next recording, have a think about what you want to achieve and who you need to help you get there. Even if your unsure, ask questions of your studio / engineer / producer… ask lots of questions. You’ll quickly work out if they get you or not. Every project is unique and needs a unique approach so don’t sign up for a cookie cutter solution. The Off Axis Sound way is to find the right approach for you, your song, and your vision, so if you’re thinking about hitting the studio soon get in touch for a chat and see if we can design the right approach for you.

See you in the studio soon.

What is the best microphone…? – Part 1